It seems like Hollywood runs on brand recognition nowadays.  Connecting a movie to an existing franchise, no matter what it is, is view as a necessary ingredient for success.  Take “Jumanji: Welcome to the Jungle,” a stand alone sequel/reboot of the 1995 adventure film starring Robin Williams.  While the film does have some Easter eggs and references to that original movie, for the most part, you could substitute “Jumanji” for any other name and it wouldn’t make any difference to the story.  But what looks like a lame attempt at modernizing a cult classic is actually a pleasant surprise, and it turns out that this new “Jumanji” goes beyond just slapping a recognizable title onto a lazily made action film.

“Jumanji,” which is directed by Jake Kasdan, opens in 1996, where a man finds a mysterious board game on the beach.  He gives it to his teenage son, who quickly discards it, as nobody plays board games anymore.  He’s into video games, but that night the board game transforms into a video game cartridge, because magic.  Fast forward about 20 years, and we are introduced to the four high schoolers who become our protagonists.  Spencer (Alex Wolff) is a smart nerd who does homework for his former friend, cool football player Fridge (Ser’Darius Blain).  Martha (Morgan Turner) is an introvert who doesn’t like anyone and doesn’t want to participate in group activities.  Bethany (Madison Iseman) is a superficial popular girl who is married to her phone.  They all do something in the course of one day that lands them all in detention, assigned to clean the school’s basement where they find the Jumanji game cartridge.  They decide to try it out, and get as far as selecting the characters they want to play when they are sucked into the game itself.

The actors playing these kids do a good job establishing who their characters are and what their personalities are like, so that when they land in the game inhabiting the bodies of the characters they chose, we get the humor in it.  Scrawny, scared Spencer is now the muscular and courageous Dr. Smolder Bravestone (played by Dwayne Johnson).  Fridge, tall, strong, and a natural leader, is now the very short “Mouse” Finbar (Kevin Hart), a zoologist who is basically Bravestone’s sidekick.  Shy Martha is now the beautiful martial arts expert Ruby Roundhouse (Karen Gillan), and Bethany, always so concerned with her appearance, is now Professor Sheldon Oberon, a portly middle-aged man. 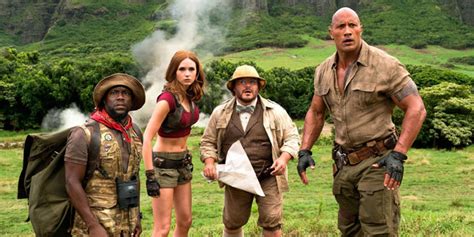 One of the things that this movie does very well is adhere to the usual video game tropes, as opposed to just sticking the characters in a jungle somewhere.  Our protagonists encounter different levels to the game, as well as non-playable characters who constantly repeat their lines because they aren’t programmed to say anything else.  They find that each of their characters have a menu listing their strengths and weaknesses, and that they only have three lives to spare in the game.  They are tasked with saving Jumanji by returning a jewel called the “Jaguar’s Eye” to a huge jaguar statue; only by beating the game will they return to the real world.  Meanwhile, they are pursued by the game’s villain, an explorer called Van Pelt (Bobby Cannavale), who is possessed by the jewel’s power and wants it for himself.

While it does have some solid action scenes, “Jumanji” is primarily a comedy.  A lot of the jokes in the script are adolescent; most of the humor is derived just from the fact that these well-known adult actors are actually played teenagers.  It’s amusing to see Dwayne Johnson show fear at the most trivial things, or Karen Gillan awkwardly flipping her hair back and forth trying to flirt with some guards.  Kevin Hart does his usual Kevin Hart thing, which I don’t mean in a bad way at all; he’s very funny in this movie and has better chemistry with Johnson than they did in their previous film.  But Jack Black is the real standout; he manages to make you believe that there is a teenage girl inside his body, from the subtlest gestures to raising his voice just a tad bit higher.

This isn’t a movie with a lot of depth, although the writers attempted to give it some—Spencer and Fridge apparently used to be best friends until Fridge decided Spencer wasn’t cool enough anymore, while Alex, the neighborhood kid who went missing in the game 20 years ago (and who in the game is played by Nick Jonas), has to deal with the fact that he has been gone for so long.  In the process, however, they neglect the film’s villain, whose motives aren’t entirely clear and who doesn’t have a very threatening presence in the movie.  There’s also the usual message of acceptance that the kids have to learn if they are going to work together to survive game.  Again, there’s nothing new here, but the film makes the twist on the original (in which the game came to the real world) an interesting, entertaining, and funny family film that exceeds expectations.

One thought on “Review: “Jumanji: Welcome to the Jungle””