Skip to content
Posted on November 9, 2016 by Katie Carter

“The Light Between Oceans” is a gorgeously shot and acted film whose subject matter sadly never advances beyond its tiresome melodramatic plot. Directed by Derek Cianfrance and based on a novel by M.L. Stedman, the drama begins in early 1920s Australia, detailing the relationship between sullen lighthouse keeper and World War I veteran Tom Sherbourne (Michael Fassbender) and the vivacious local girl Isabel (Alicia Vikander).

It’s this portion of the film that is the most effective. Tom and Isabel strike up a correspondence while she lives in town and he is off tending the lighthouse on the remote Janus Rock. They fall in love and decide to get married. They’re happy, especially when Isabel reveals she’s having a baby. Then she miscarries. And miscarries again. These scenes are beautifully acted by Vikander, whose portrayal of a young woman sinking into depression after she fears she’ll never be able to have children is heart-breaking, and Fassbender, whose Tom obviously feels helpless as to how to raise her spirits.

Then one day, a rowboat washes up on the shore where they live. There is a man and a baby girl inside; the man is dead, but the baby is alive, and Isabel is immediately taken with her. She immediately hatches a crazy scheme, not wanting to give the girl up. Isabel tells Tom to lie in his reports; that no one knows she just miscarried and they could pass the baby off as their own. And not only that, but he should bury the dead man’s body and tell no one of its existence. After some protesting, he goes along with it. They raise the girl, who they name Lucy, for several years, until Tom meets a woman in town named Hannah (Rachel Weisz), whose husband and baby girl went missing at sea several years ago — and her daughter would be about Lucy’s age by now. 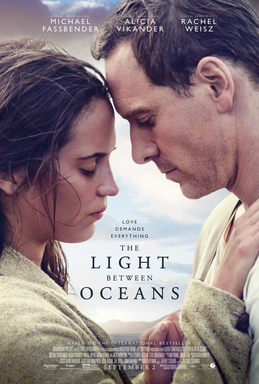 “The Light Between Oceans” raises an interesting moral dilemma for its characters that sadly gets a bit lost in all the drama, a lot of which is rather unbelievable. Isabel uses the excuse that no one would officially approve them for adoption because they live in such a harsh environment so far from civilization, which, okay, is maybe true. But even her intense yearning for a child doesn’t justify the leap this seemingly good-hearted woman makes in convincing her husband to participate in such a crime. That isn’t the most bothersome part, however. It’s the movie’s third act that really takes things too far, as the back-and-forth between Isabel and Hannah as to who the child’s real mother should be — her biological one or the one who raised her — becomes overwhelming. The story tries too hard to be a tear-jerker, and it doing so it doesn’t generate any real tears (unless those are tears of pain wondering when the movie is ever going to end). There are other reasons why the third act of the film is mess that would be venturing into spoiler territory to mention them specifically; suffice it to say that certain characters do certain inexplicable, stupid things that simply don’t make sense.

Having said that, “The Light Between Oceans” is pretty watchable, even if the payoff is unsatisfying. The actors, as mentioned before, do a great job. Besides Fassbender and Vikander, there’s Weisz, who is overly weepy at times but has some striking moments with little Lucy. The film features a lot of gorgeous cinematography, with much of it being shot on location in New Zealand and Australia, and the montages depicting the passing of time, such as the early months of Isabel and Tom’s marriage and their early, happy years raising Lucy, are quite effective.

A lot of the problems with “The Light Between Oceans” likely lie in the source material. But Cianfrance’s attempt to transform it into awards season fodder doesn’t work either.

2 thoughts on “Review: “The Light Between Oceans””